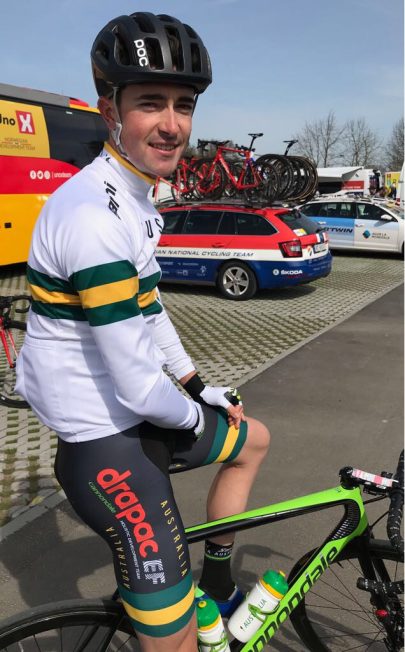 Drapac Cycling is proud to announce that James Whelan will be racing for the Australian Cycling Team at the 2018 UCI Road World Championships in Innsbruck, Austria.

James will be competing in the under-23 road race, alongside WorldTour riders Lucas Hamilton, Michael Storer, Jai Hindley along with Robert Stannard, and Callum Scotson.

Said Whelan of this opportunity, “It’s an absolute honour to be selected in a very competitive U23 Australian team for the World Championships in Innsbruck, Austria”.

I would like to thank all of my support groups for assisting me in all areas of my development on and off the bike. I cannot wait to represent my country with excellence and see what can be achieved!”

James has had an incredible year on the bike, beginning with his 2nd at Nationals to now teammate Cyrus Monk, his under-23 win at Oceanias, followed by his impressive win at the under-23 Ronde Van Vlaanderen.

“It’s exciting to see a Drapac rider and university student representing our country with the best young cyclists in the world. I’m sure James will do Drapac EF and his country proud”, said Drapac EF team owner Michael Drapac.

James is currently representing Australia at the Tour de L’Avenir in France and will then move to Spain temporarily to complete his 2018 stagiaire role with EF Education First-Drapac Pro Cycling.

Drapac Cycling is also currently competing in the National Road Series at the Tour of the Great South Coast, picking up a 3rd on stage 4 today with Patrick Burt, and current under-23 National Champion Cyrus Monk is currently completing his 2018 stagiaire role with EF Education First-Drapac Pro Cycling in Belgium.

For any enquires, please contact the team at info@drapaccycling.com