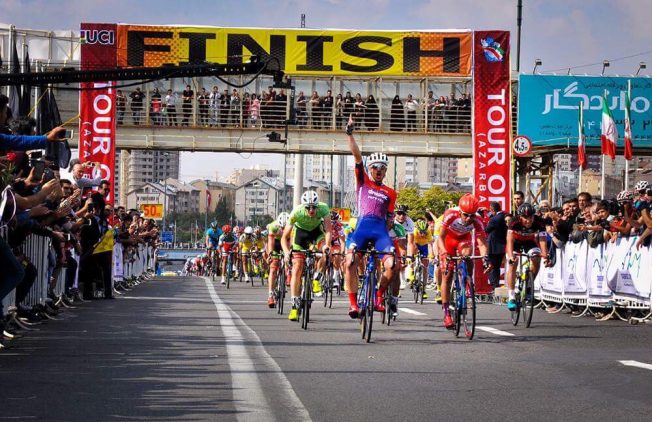 Drapac Pat’s Veg have finished the 2017 Tour of Iran in style as Theodore Yates stormed home to win the sixth and final stage in Tabriz City.

“I’m really happy with my results from the Tour of Iran, and to finish it with a win is incredible. Coming into this tour I knew what it took, after winning a stage in 2015. The boys rode their hearts out all tour over some super testing terrain, I was glad to reward their efforts with the team’s 2nd UCI win of the season”, said Yates of the Tour.

Theo’s stage win tops off a very successful week for the team, who had top ten results in every stage, including two podiums, and Jesse Featonby and Mathew Ross coming 4th and 5th on General Classification respectively. Ross also ended up 3rd in the Youth Classification, and was on track to become a stage winner too, however an untimely puncture 2 kilometres from the finish line in stage 4 unfortunately saw him eventually cross the line in 21st place.

Liam White, who managed a 2nd place on stage one, was very happy about his podium, and time spent in the Young Riders jersey. The Tour of Iran is only Liam’s second UCI race in his cycling career.

Said White, “The Tour was great, and I can’t wait to go back. We met some great people and as a team, I believe we once again punched above our weight”.

The Tour of Iran is a notoriously challenging race on the UCI calendar; this is the first UCI 2.1 race that Drapac Pat’s Veg has competed in.

Sports Director Agostino Giramondo very satisfied with how they performed. “The boys rode very well and as a team they committed to each other day in and day out, which was reflected in our results”.

Drapac Pat’s Veg ended the Tour fourth overall in team classification, and with an enormous amount of experience and confidence going into the last part of the 2017 season.