Drapac Cycling sets its sights on the Tour of Korea 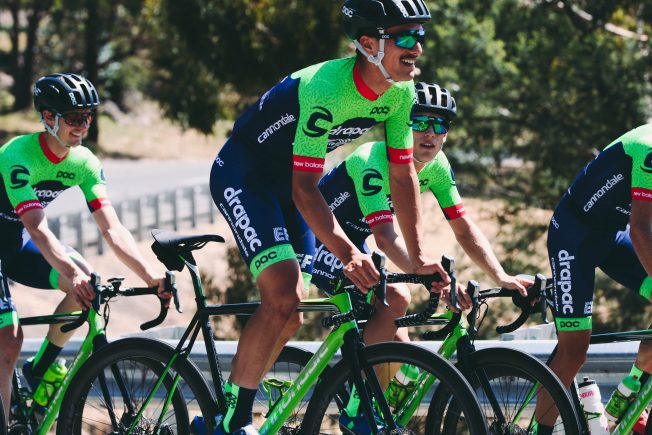 After beginning their NRS campaign in wet and windy conditions in Grafton earlier this month, the Drapac EF p/b Cannondale Holistic Development team now heads to the UCI 2.1 Tour of Korea.

The squad is a mix of new and experienced riders, with the youngest Drapac rider Liam Magennis earning a spot, alongside current under-23 National Champion Cyrus Monk. Joining them is team sprinter, Theo Yates.

Said Yates, “I’m really looking forward to racing this race coming off some sickness and clocking up some serious AutoCAD time at University. I’m super motivated to get busy with the boys. We’ve all been training hard for this tour and the lead up to Europe, so I have no doubt that we can pull out a stage result and a high GC placing”.

Liam White, who has had an outstanding start to his 2018 season, will also be heading to Korea with the team. “We’re going into the race with a very diverse team and should have guys for whatever the tour throws at us. Personally, my form of late has been very consistent and hopefully I can carry that into Tour of Korea”, said White on the upcoming Tour.

Rounding out the squad are the team’s climbers, Sascha Bondarenko and Jesse Featonby. Said Jesse, “My summer of cycling was hindered by illness so it’s great to be back healthy and enjoying cycling. I’m incredibly fortunate to have had some great support from Drapac EF and support staff. After graduating a month ago, I have settled into working in my chosen profession as a teacher and having the support to juggle both is really something unique that this team offers. We have an excellent squad of riders who want results and I’m looking forward to putting it all on the line for them”.

Team Sports Director Agostino Giramondo is optimistic for what the tour will bring for Drapac, “I️ expect the boys to ride as a tight-knit team and we’ll pin our hopes on Featonby being on the GC podium. As far as stage results we will aim with Magennis early in the week. I️ expect Monk to be solid with a possible stage win from a breakaway group and this, in turn, would put him in the box seat for a podium as well”.

The Tour of Korea begins on Wednesday the 30th of May in Gunsan.