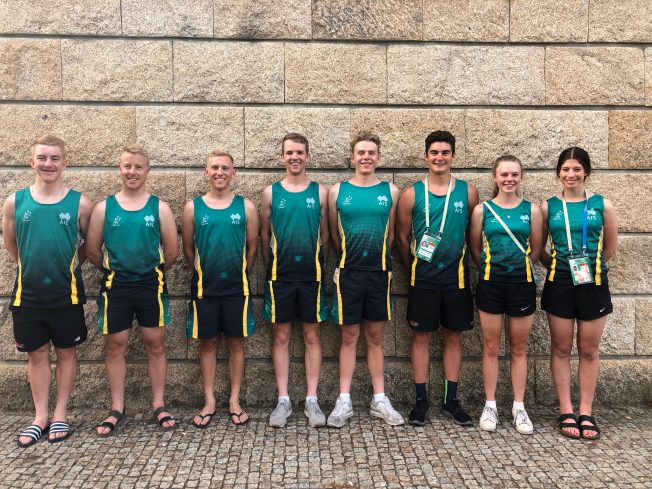 Australia has enjoyed a successful campaign at the World University Cycling Championships in Braga, Portugal, supported by UniSport and Drapac Cycling.

Liam Magennis of Charles Sturt University and Drapac Cycling came away with 1st in the men’s individual time-trial and 3rd in the men’s road race.

“I wasn’t expecting to win the time-trial as I hadn’t been training specifically for it. I took the hot seat early and fortunately, my time of 33 minutes and 52 seconds remained unbeaten”, said Liam on his incredible ride. Rounding out the podium was Poland and Cyprus in second and third respectively.

Other notable results in the individual time-trial were University of Melbourne students Cyrus Monk, also from Drapac Cycling in 4th for the men, and Ruby Roseman-Gannon in 4th for the women.

Ruby Roseman-Gannon and Emma Chilton both competed in the women’s road race, with Ruby coming away with another hard fought 4th place, behind Poland and Germany.
“A race like this in such hot conditions isn’t something I’m usually suited to, so I’m really happy with my fourth place”, said Ruby on her incredible effort.

After such a strong showing in the time-trial on Tuesday, the Australian men went into the road race on Saturday with high expectations. Due to the extreme weather predicted, the race was shortened to 105 kilometres.
The temperature soared to the high forties, however with the help of his teammates, Australia’s Liam Magennis was able to escape the main group and lead for much of the mountainous race, before being caught in the last few kilometres by the team from the Netherlands. He finished in third, outnumbered, and in extreme weather conditions.

Said Liam on his third, “I’m so happy that I was able to hang on for third in such a hard race. Thanks to Charles Sturt University, my Aussie team mates, my coach Stu and Drapac Cycling for all of their support for this week!”.

Out of the eight competitors that were selected to represent Australia at the World University Cycling Championships, four are current Drapac Cycling riders; Liam Magennis, Liam White, Cyrus Monk and Sascha Bondarenko.

Australia’s success at the World University Cycling Championships shows further support that athletes can excel in their chosen sport as well as pursuing higher education, which is an important aspect of Drapac Cycling and its philosophy towards a study and cycling balance.

The next World University Cycling Championships will be held in the Netherlands, where Australia will look to defend its time-trial and road race results.

Drapac Cycling now turns its attention to the National Road Series’ Tour of the Great South Coast which begins next Wednesday in Mount Gambier.